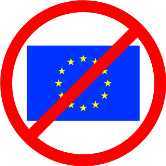 The conservatives are doing a good job pushing for a referendum on the EU Treaty (Constitution).

"The red lines are unravelling by the day, every time we get more detail about this. All of those vetoes other than over defence can be abolished by agreements between European governments in future, without having to go through the whole process of negotiating a fresh treaty or ratifying that in any formal way. For instance there is a declaration attached to the treaty that is supposed to protect our independence in foreign policy but it now turns out that is not legally binding."

Europe minister Jim Murphy told the BBC: "We wouldn't sign up to any treaty that transferred in any significant way, any UK sovereignty to the European Union." So that must be Jim Murphy, the minister for Europe and talking bollocks.

We have until October, (when the final text is expected to be ready for a summit in Lisbon) to stop this rape of our sovereignty.

Posted by Daily Referendum at 06:33

Labour, as usual, just keep lying about it! Keep up the good work and keep pushing for a vote