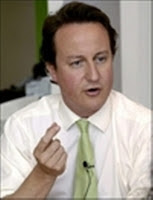 BBC political correspondent Sean Curran said analysis of the eight by-elections suggested that nationally the Tories should have a lead over Labour of 6.2%. This lead would see a hung parliament, and we've still to have our conference which could see a bounce for us.

It is not over yet, remember: It's time for a change.
Posted by Daily Referendum at 08:59

Steve - it's time you were preselected, methinks and I'm being serious. The party needs more talent.

Thanks James, but I'm afraid I would be out of my depth. I'm pretty new to this game and I've a hell of a lot to learn. I'm too scared to go on 18 Doughty Street!

So whats with the opinion polls and that cadaver Tebbit?

They are both irrelevant.