Boris Johnson must beat Ken Livingstone on May 1st. 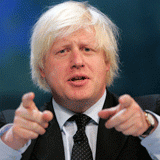 With only three days to go until the election for the next Mayor of London, the polls are showing Boris and Ken on level pegging. Having been (until recently) a life long Labour supporter, I can say with all honesty that I cannot understand how Ken Livingstone became Mayor, or continued to get elected. He always reminds me of an evil villain from a Bond movie, or the corrupt official at odds with Batman. When do you ever hear anything good said about Red Kenneth in the media? how often has his name been linked to the dubious activities of others? Why the hell do people vote for him? it's beyond me. Maybe he has a massive family.

I'm reasonably sure that Boris will come out on top - the main reason being that I believe there are now more people who want to stop Ken winning than there are wanting to bash Boris. Boris has been at a disadvantage in these latter stages due to his less than polished public speaking ability. It's a shame he can't articulate the message he writes so eloquently. Boris has some great ideas for London and a real passion for the position of Mayor. It's maybe his passion for London and the job of Mayor that causes Boris to occasionally fall over his words.

There is no doubt that the result of Mayoral election will have massive connotations across the whole country. One Mr G Brown of Downing Street will be devastated if Ken fails to remain in office. And if the local elections follow the trend of recent polls, then Gordon could be in for a left-right combination that he will be unable to get up from. David Miliband must be torn over the outcome. He will not want to see Labour lose, but a loss would most likely see him stood where all MPs dream of standing - at the dispatch box every Wednesday lunchtime.

If you live in London and you aren't sure which way to vote, and if you have not been convinced by Boris's public speaking, then please take a little time read what Boris has planned to improve our Capital.

A vote for Boris is a vote for London.
Posted by Daily Referendum at 15:29

It's maybe his passion for London and the job of Mayor that causes Boris to occasionally fall over his words.

I see a mayor as a representative for the city and he's great in that role.

I agree. Rooting for Boris all the way.

A vote for Boris is a vote to get rid of Labour and give London a chance - the Lib Dems would do well to remember that.

Without doubt if the slimy Livingstone wins in London the odious Labour regime and most of the media will claim it as a victory for gormless Gordon and his rotten administration, it is almost too ghastly to contemplate!
The scale of the fraud will decide it.