Nine days to the end of the world? (Man-made black holes) 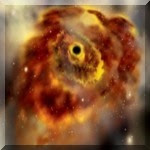 SCIENTISTS are trying to stop the most powerful experiment ever – saying the black holes it will create could destroy the world. Dubbed by some the Doomsday test, it will be carried out next week in the Large Hadron Collider (LHC), located 300ft underground near the French-Swiss border. The machine is 17 miles long and cost £4.4billion to create.

When its switch is pulled on September 10, this atom-smasher will become a virtual time machine, revealing what happened when the universe came into existence 14 billion years ago. New particles of matter are expected to be discovered, new dimensions found beyond the four known, as scientists re-create conditions in the first BILLIONTHS of a second after the Big Bang. Experts even predict that millions of tiny black holes will be produced — baby brothers of the monsters gobbling up dust and stars at the heart of the galaxies.

That is why boffins are now trying to stop the project with a last-ditch challenge in the courts. They fear the LHC experimenters are tinkering with the unknown and putting mankind — and our whole planet — at risk. The group responsible for the experiment, the European Nuclear Research Centre (CERN), says that these mini black holes will vanish as quickly as they are created. But anti-CERN the brigade accuse the scientists of playing God, warning that no one can guarantee that the black holes will not survive, rapidly growing in size to suck the Earth out of existence in an instant.

This Youtube video gives an excellent visual explanation of what the anti-CERN group are worried may happen and are trying to stop.

But don't panic just yet. The people at CERN say there is nothing to worry about:

Nature forms black holes when certain stars, much larger than our Sun, collapse on themselves at the end of their lives. They concentrate a very large amount of matter in a very small space. Speculations about microscopic black holes at the LHC refer to particles produced in the collisions of pairs of protons, each of which has an energy comparable to that of a mosquito in flight. Astronomical black holes are much heavier than anything that could be produced at the LHC.

According to the well-established properties of gravity, described by Einstein’s relativity, it is impossible for microscopic black holes to be produced at the LHC. There are, however, some speculative theories that predict the production of such particles at the LHC. All these theories predict that these particles would disintegrate immediately. Black holes, therefore, would have no time to start accreting matter and to cause macroscopic effects.

I don't know what the truth is. Will this experiment form stable Black Holes? CERN say not, but then again, this is the first time it's been tried.

If you have anything important to do before September 10th, it may be a good idea to start now.
Posted by Daily Referendum at 14:34

Well I'm going to take out a big loan and go on a spending spree until the 10th.

Obviously if the world doesn't end then I've got a problem...

Don't worry Ross, the government will probably bail you out.

Oppenheimer and the rest of the Manhattan Project bods considered the possibility that a nuclear detonation could ignite the Earth's atmosphere... that didn't stop them either. Hey... don't worry... we're scientists.

Are you aware of the history of LHC safety?

Former Nuclear Safety Officer Walter L. Wagner discovered flaws with CERN's safety arguments. He believes that the Large Hadron Collider could create dangerous particles that might destroy Earth, so he filed a law suit to require proof of safety. [1]

In response, CERN scientists created a safety report in 2008 that argues no real chance of danger. [2]

On August 14th, CERN's Dr. Jonathan Ellis stated that there is no real danger and they will not proceed slowly, collisions will begin in a few weeks. [4]

Another German scientist famous for contributions to Chaos theory and a visiting professor of physics Dr. Otto E. Rössler theorizes that if micro black holes are created in the Large Hadron Collider, they could grow large enough to destroy Earth in just years or decades. [5]

Dr. Rössler requests that an emergency safety conference be held before collisions begin. He is due to meet Swiss President Pascal Couchepin to discuss safety concerns.

[2] http://public.web.cern.ch/public/en/lhc/Safety-en.html The safety of the LHC, Web Site - CERN

Oh, dear! I am reminded of Larry Niven's short story "Wrong-Way Street". Worth reading, as are all of Larry's stories from the seventies and eighties.

You Have Got To Be Kidding Me!? I hope You all realise that this will be the end of everything! We Need To Stop this NOW!

Meanwhile our health and safety nazis worry about conkers and hanging baskets..

Indeed, they've gone conkers bonkers; and perhaps they should be hanging alongside the baskets as they are clearly basket cases themselves.

u shouldnt do this expermient if u do then yur idiots no body dosnt even want a risk of dieing so PLEASE DONT DO ITT !!!!!!!!!

Are these people in complete madness??? This Machine should have never been built as even contimplaiting testing this machine would be tampering with man kind how inconsiderate is that? Do these people not have lifes to live???? how God damn right selfish of these people they should destroy this machine NOW!!!

the nuclear reaction the the earths atmosphere and the earths core have different time cords and the earths rotation the black holes all over the universe are at different angles i know this sound strange but i am correct.

this meaning the earth will end in 9000 years mabey longer

you have it all wrong.

this was sent by

its ok for the scientists to say th at but how do they know,why cant things be left alone and what a waste of money which could have gone to poverty