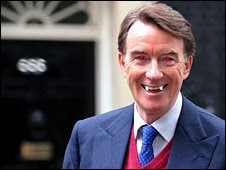 Gordon Brown could have just put the final nail in his own coffin by bringing in Peter Mandelson in his latest Cabinet reshuffle. If there was ever a man able to stick the first knife into Brown's back, it's his old enemy Peter. Mandelson was the man who secretly supported Blair, rather than Brown in the Labour party leadership election. Replacing John Hutton as the Business Secretary, Mandelson will provide a major boost for the Conservatives chances in the General Election. He doesn't like Brown and Brown reciprocates those feelings, he's left the cabinet twice already, the first time he jumped (before being pushed), the second time he was sacked (you can find out why HERE).

I just don't get Gordon Brown at all. At a time when he says the country needs stability, he reshuffles his Cabinet with the obvious consequence of upheaval in the decapitated departments. At a time of instability in the party, he brings in someone who doesn't like him and has done the dirty on him once already. At a time when the population are becoming increasing Euro-sceptic, Brown brings in a raving Europhile. After a year of sleaze, he brings in a man who happens to have a very shady past. I think Brown could be a Conservative plant - a man with a mission to destroy the Labour party before 2010.
Posted by Daily Referendum at 10:08

they have no one left in the party
they can think of to help them. I doubt they have anybody anywhere in the dis- united kingdom worthy of fighting an election.
Two weeks after blair was voted in with my help, me and the lads at work agreed there was to be no change and we understood then what new labour meant. It did not involve us.

Like everything Brown does, it is not thought through, just reacting to events.
Off topic Steve, the accusation of political interference in the police from Labour would have had most people choking on their cornflakes.
They really are deluded, make no mistake we are being ruled by a right set of loonies.
It will take the Tories years to bring order back from this loony left chaos.

Ah, jaws (of a sort). Perhaps he should be nicknamed "Mandy Bull"...