Eat your cats and dogs to stop climate change! 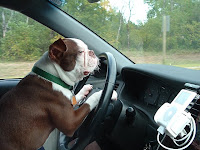 Eat your cats and dogs to stop climate change! - I kid you not! Some genius (who probably wears clothes made from his own pubic hair) has worked out that even though our cats and dogs have small paws, they have large carbon footprints. A medium-sized dog has the same impact as a Toyota Land Cruiser driven 6,000 miles a year, while a cat is equivalent to a Volkswagen Golf.

This planet saving advice is explained in the book: "Time to Eat the Dog: The Real Guide to Sustainable Living". The author, Robert Vale, says:

"There are no recipes in the book. We're not actually saying it is time to eat the dog. "We're just saying that we need to think about and know the (ecological) impact of some of the things we do and that we take for granted. "Once you see where cats and dogs fit in your overall balance of things, you might decide to have the cat but not also to have the two cars and the three bathrooms and be a meat-eater yourself."

You know what's coming next don't you? I can just imagine Gordon Brown salivating over his new cat and dog tax.

you really are a fucking moron

I don't think you beleive honestly for one moment that the government would consider this.

Personally I find the whole owning a pet thing odd in the first place.

I know this is my own personal view, but wanting to own a dumb animal that is therefore totally reliant on you seems very very strange.

I know people will come back with the "love they give" argument, but love is an emotion and actually it isn't love, it is dependence that they show.

My standard stock response to anyone when they ask if I like animals is simple. Yes I love any animal I can eat.

Have a good weekend.

No I don't believe the government would stoop quite that low. But this kind of article shows how crazy this climate change row is getting.

Why not just eat cats an dogs cause they are tasty very tasty? :)

Saw this in a few places, Steve, but thought yours was the most entertaining treatment. Used it in a post on own blog (www.clameurdeharo.com) but with the usual H/T acknowledgement.

BTW, have signed the petition on No. 10 website. Utterly disgraceful propoganda - Dr Goebbels would be proud.