I don't know about you, but this sounds like it could be a thinly veiled threat from the Mirror's Paul Routledge to Andrew Marr.

From the Mirror.co.uk News:

BBC presenter Andrew Marr was out of order, demanding to know, on live TV, whether the Prime Minister is taking anti-depressants – merely on the basis of unsubstantiated internet gossip that had been officially denied.

He has refused to apologise. He should think again – or some scandalmonger might start spreading rumours about his interesting private life, which he guards with the tenacity of a Staffordshire bull terrier. 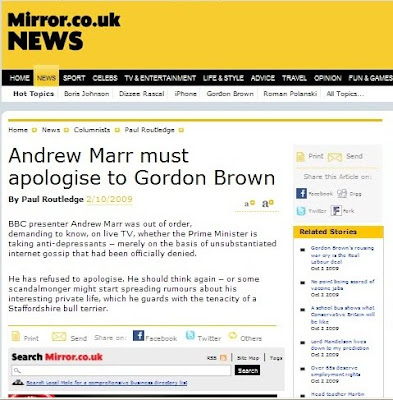 Posted by Daily Referendum at 01:03

Oh, yes, I think he is. Do hope the Mirror Man knows what he is doing...

I agree that it does indeed sound like a threat or blackmail or something. Absolutely totally appalling!

Is Mr Rouledge the new Damien McBride or something?

It would be nice (albeit naive) to hope that the Mirror apologises and pulls the article - in an ideal world Mr Routledge would be kicked out before he had time to apologise personally!

I also notice that the lovely Mr Staines also picks up on this but inevitably has to go one further and disclose the rumours.

Maybe Paul (I knew about Mandelson's loan but didnt want to tell anybody) Routledge should ask hinself what the job of being a reprter is all about!

"It was revealed in The Independent on 27 June 2008 by Richard Ingrams, that Marr has gained a high court injunction preventing disclosure in the press of "private information". Unusually, permission had also been granted for the existence of the injunction not to be mentioned, and it was indeed not mentioned until Private Eye commented on it."

... wasn't Alastair Campbell a Mirror hack? Also, with Mandy on his tail... I don't fancy his chances.