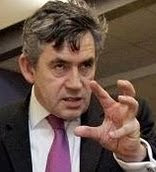 Gordon Brown said for the first time this morning that businesses had been ‘deceived’ over their opposition to Labour’s National Insurance increase – Labour’s jobs tax. Shadow Chancellor George Osborne said:

"Gordon Brown has this morning declared war on British business.

"For the first time he has said that business leaders have been “deceived” into opposing Labour’s jobs tax. When Peter Mandelson made the same accusation, they reacted with understandable anger.

"This is a highly significant moment which proves that Gordon Brown is on the wrong side of British business and working people who know that Labour’s jobs tax will put the recovery at risk."

Posted by Daily Referendum at 09:42

The trouble is that Brown etc. have been nice to some sorts of business and have let them run riot at their own profit but have largely been dismissive and very Old Labour in their attitude and conduct to real business, the one that delivers the real wealth and the real jobs.

I agree with Demetrius: Brown has stood on the stage and stated "we must compete in a global market", "I support small business" and then procedes to drop Corp Tax for large businesses while raising it for SMEs, not forgetting the other stealth taxes he has inflicted us with over the last 13 years.

I thought corporation tax was stating at 28%.