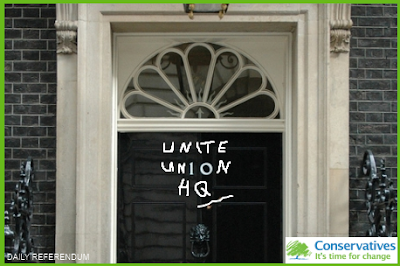 During yesterday's PMQs, Gordon Brown refused to give his backing to those British Airways staff who want to work during the upcoming Unite strikes. We have also discovered that some No10 staff are fully paid by the Unite Union. Add this to the massive donations given to Gordon Brown's Labour party, the campaign machine set up in marginal seats, and the number of Unite members standing as Labour MPs, it seems pretty obvious that No10 Downing Street is under new management.

Gordon Brown is nothing but Charlie Whelan's puppet.

Note: This is not an official Conservative Poster.
Posted by Daily Referendum at 09:15