The Lib Dems try to cover up their all white shame.

Not satisfied with launching a new General Election slogan which is a rip off of both the Labour and Conservative slogans, the Lib Dems have managed to sink even lower in a pathetic attempt to hide their all white shame. THE RED RAG blog has rightly pointed out the duplicity of the Lib Dem's new message to the voters.

Can you spot the difference?

This is the new picture that appears on the Lib Dem website:

And this is a picture of all the Lib Dem MPs. 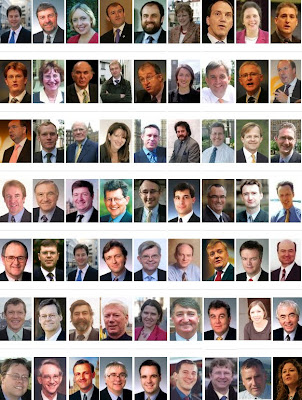 There was a good extrpoloation of the situation in Lib Dem seats, figures on how many MPs were newly eleted and how many seats had been won or gained by parties with ethnic minority candidates.

The result of this was that the Lib Dems have fewer safer seats, the vast majority of Lib Dem seats were still held by the people that won thea seats (in 97, 01 and 05) and that the situation had not yet arisen where these seats were selecting new candidates to repalce candidates stepping down.

The figures also showed that the Tories number of EM MPs had only happened in safe seats, (which the Tories have lots of and Lib Dems have very few of) whilst the Tories selected very very few (less than the Lib Dems) in winnable seats they hoped to gain.

Now we can spin things to imply all sorts of nastiness, but this attack is baseless and silly. I know you are desperate (like Iain Dale) to attack the Lib Dems at all costs, but like Iain, it devalues your arguments.

Whatever, You have a mostly male all white group of MPs, and from what I hear none of you EM candidates have been put up in winnable seats. You're all white now and you'll be all white after the Election - just fewer of you.