General Election 2010 - Labour and the Mirror get desperate - tactical voting

You may have noticed that Gordon Brown and his ministers have become increasingly desperate over the last few days. They are telling blatant lies about Conservative policy in the hope that they can scare enough voters into voting for them. They have always used the rule that if you tell a lie often enough, then the people will believe it. It shows a great contempt for the intelligence of the British public.

However, what the Daily Mirror have done this morning is their lowest act of desperation so far. Being the ONLY paper left supporting Labour, they have decided to tell their readers how to vote tactically. Always a Labour paper, they are now telling Labour voters to vote Lib Dem in marginal seats, and vice versa. You have got to admire their loyalty when almost every other paper has realised that Labour are finished and that the Conservatives are the party to get us out of this mess. I imagine all the Mirror journalists are sat in the office with their eyes shut, fingers in ears, shouting LA LA LA, WE CAN'T HEAR YOU: 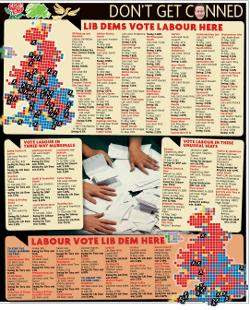 Posted by Daily Referendum at 08:50