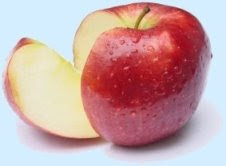 Take a look at this apple. The slice represents the UK's membership of the EU. The slice has a pip, and that pip is our representative on the European Council. Each of the twenty seven EU member states has a similar slice. Even though we are individual slices, we are linked because we are all part of the same apple. Our pip is very important because it represents our country's interests and protects our sovereignty within the apple.

The failed Constitution and now the Lisbon Treaty aims to join the 27 segments together to produce one big apple. The problem is this: Our pip would no longer represent our slice - it would become just one of the big apple's pips. In effect our part of the apple would be seedless, the pips make the decisions and the big apple no longer has a say and must obey the pips' rulings. That is a big step for our slice to take, that's why we were promised a referendum by all the major parties - and that is why we must have a referendum.

Then along comes Lib Dem supremo Nick Clegg to suggest that it would be better if we had a referendum not to decide if our slice joined the apple, but whether it would be better if we became an orange. And he wonders why the speaker rejects his proposition as irrelevant to the debate? I wouldn't mind so much if Nick Clegg wasn't so keen to join the apple and has no intention of ever becoming an orange.
Posted by Daily Referendum at 18:04

I think Clegg's call has been largely discredited now.

That doesn't seem to be stopping him.

Cheers, I know it possibly over simplifies a complex situation, but I hope it makes sense.