Crewe and Nantwich - And the Polls are open.

It's a bit sad I know, but I've been looking forward to today's by-election in Crewe and Nantwich as much, if not more than last night's footie (well done ManU). I've got a feeling in my water that unlike last night, we are going to see a massive (10,000 ish) win for the blues. I received a press release last night from the lovely people at PoliticsHome. Unfortunately I couldn't post it as, one - it arrived just before the football started, and two - I was at work (12 hr night shift). The said press release indicated their PHI100 panel's opinion on what would be a good or bad result for the two main parties involved: 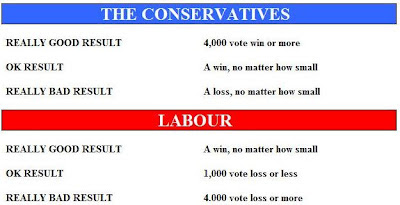 I have to agree with the panel that anything over 4000 for the Conservatives would be a really good win, but as I said, I'm expecting more. The reason I'm predicting such a large win? The way I see it is that Labour (Gordon Brown in particular) are becoming more unpopular by the day and I think they are in for one mighty shock when the counting is over. I've been saying for six months that Brown will be on his way in May this year, and I would say that there is an 80 per cent likelihood of his ultimate demise being set in motion on Friday.

Ditching Gordon Brown will not help Labour win the next election - they've become too unpopular and even that won't help them. It will however give them a fighting chance of remaining the second largest party in parliament. The drums are beating and coalitions are being formed behind closed doors in the Labour party. You can bet that getting rid of Gordon plan A and plan B are ready to roll. Plan A will probably based around forcing Gordon to step down through a lack of support - i.e. he will be slagged off something chronic by a large number of Labour MPs in the press. Plan B will require MPs to play by the rules and I don't think they want to wait that long or drag the party through the mire.

So that's my prediction. I'll update this post after the dust has settled to either say "ooh ooh I'm the King" or to eat humble pie.
Posted by Daily Referendum at 07:18

Letters From A Tory said...

tonight is a night for celebration..i'm off to the shops to stock up.