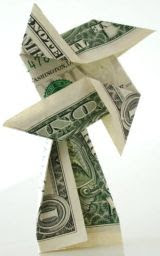 This is a post I wrote a while ago, and now seems like a good time to put it back up:

The government has blown (excuse the pun) half a billion pounds subsidising the wind turbine industry. "So what, it's a worthy cause" I hear you say. Well, it turns out that it is anything but worthy and more worryingly, it is a total waste of our tax money. It is alleged that energy companies are receiving subsidies for wind farms that will never make any money, because they have exaggerated the potential of sites with not enough wind.

The government are miles away (or kilometres as our EU friends prefer) from achieving the target of providing 20% of our energy from renewable sources by 2020. Despite blowing (there I go again - sorry) half a billion pounds of our money, the energy companies have failed to provide even 0.5% of our requirements. For a wind farm to be viable it must have a load factor of 30 per cent. But Jim Oswald, an engineering consultant, found that the average across the country was 28 per cent.

Michael Jefferson, policies chairman of the World Renewable Energy Network believes that the subsidies are encouraging energy companies to exaggerate the amount of potential wind energy a farm can supply. Mr Jefferson said: "We should be putting our money where the wind is and that is quite often not where the development pressure is."

In a previous post about nuclear power’s life-cycle emissions it turned out that the life-cycle greenhouse gas emissions for nuclear plants are lower than that of wind farms. Now it turns out that on average these farms are not even financially viable.

For God's sake (and ours) let's stop pandering to the EU green brigade, and get some nuclear power plants built.

Posted by Daily Referendum at 19:25

We've got a wind farm here in Northamptonshire. It's as far from the sea as you can get and the wind hardly blows. All they do is block the TV signal.
There are planning applications for more of these monstrosities in the area, plus, wait for it, an electricity power station that will burn rape oil at the rate of 1 tanker load a day. Someone worked out that you could feed hundreds of thousands of africans on the land that would need to be cultivated just to keep it going for one week.
Surely it'd be cheaper to feed fivers to the flames?

Wind power is only a part of the solution - but a vital part, wind chill pushes the demand on the power grid up by around 20% or more in cold weather, wind turbines are ideally placed to off set this power demand, this is why they are so useful, and will be especially useful should the bulk of our power come from inflexible atomic power station in the future. Also, despite their higher up front cost, (requiring grant support) wind turbines produce over their life time, the cheapest power on account of not needing any fuel. A typical wind turbine consumes about 1,000 tonnes of resources in the course of its construction, but saves about 2,000 tonnes of emissions in the first year of operation alone. Turbines are a low maintance form of power generation that can run unattended. 8,000,000 birds are killed every year by flying in to things like power station cooling towers (I know!).Most people love turbines, and I speak for the 90odd percent majority in my appreciation of these elegant quiet, and beautiful machines.