Labour's Margaret Curran - You couldn't make it up.

I'll say this for Margaret Curran - she's got some neck. In the Labour campaign leaflet below, Margaret criticises the SNP saying "Thousands of drug dealers, thieves and neds will be released onto our streets under SNP plans to empty our jails" Actually what the SNP plan to do is reduce the number of sentences of under six months handed out by using community service and fines as an alternative. But what really gets me is how she can criticise the SNP when Labour are doing far, far worse. 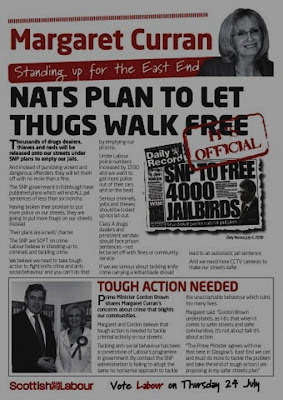 Maybe Margaret should read this article from the Independent and reconsider her campaign leaflet design:

Nearly 29,000 criminals have been freed from prison early in the first 11 months of an emergency scheme to beat jail overcrowding, it was announced yesterday.

Figures released by Justice Secretary Jack Straw showed there were 2,532 offenders freed up to 18 days early in May, bringing the total to 28,879.

The scheme has already exceeded the government's original estimate of how many inmates would be freed in the first year.

Officials had predicted 25,500 criminals would be freed in 12 months but that total was breached in April's figures, just 10 months into operation.

Last week it was revealed that one of the freed inmates is alleged to have raped someone.

The alleged attacker would have still been behind bars at the time if the early release scheme had not been in force.

Mr Straw has also been forced to make emergency changes to the rules of the scheme after it emerged that two terrorists had been freed early.

"The Government promised that this policy which is so undermining confidence in our criminal justice system would only be temporary - but if it will only be reviewed in September 2009, almost 70,000 prisoners will have been released early.

"It should be scrapped immediately before any more harm is done."

Currently, 89 offenders recalled to prison after being freed under the scheme are on the run.

Guido has spotted a problem with Margaret's campaign site.
Posted by Daily Referendum at 23:10

Gobsmacked that they'd actually do it. Cynicism or incompetence. which?

I believe it's the former James.

I spotted the item on Guido, and wrote my own attempt at crystallizing what was really going on. I hope that my meagre effort (admittedly in the middle of the night!) covers the bases of that particular matter, which of course will not be reported on in the Left-leaning parts of the mainstream media (i.e. most of 'em).