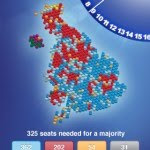 Following the launch of the Conservative iPhone app, Labour have launched an app of their own.

Features in the launch version of the app include:

■User-friendly guide to all the key policy dodges.
■Ability to telephone canvass potential comrades and report their voting intentions back to the Party (great way to target bribes i.e. free laptops).
■Simple mechanism for donating directly to the Party (a bit like union dues, but with your permission).
■Easy way to watch all the latest Prescott Vlogs (you lucky people).
■Virtual ‘Swingometer’ featuring a UK map getting bluer as Labour's percentage share in the General Election decreases.
■Automatic Twitter updates (directives) from the Labour Party and integrated access to the Facebook page (access will be monitored).

“Once again, the Labour Party is almost at forefront of digital innovation in UK politics. This iPhone app will help both existing supporters (yes there are some) and floating voters (bribe targets) learn more about our policies (when Ed finally gets around to knocking up a manifesto), connect with us on social networks (again, access will be mon..) and share political smears with comrades.

“Whether it is on websites, social networks or mobiles, we are the only Party that has fully embraced spin and lies in the run up to the General Election.”
This not a real app, or a direct quote from Prescott.
Don't forget to retweet if you like this.
Posted by Daily Referendum at 15:58

Sorry Pete, I deleted your comment by accident. This is why I was modded:

Not that bad I thought.

Don't leave that running and put the phone in the same pocket as your wallet.